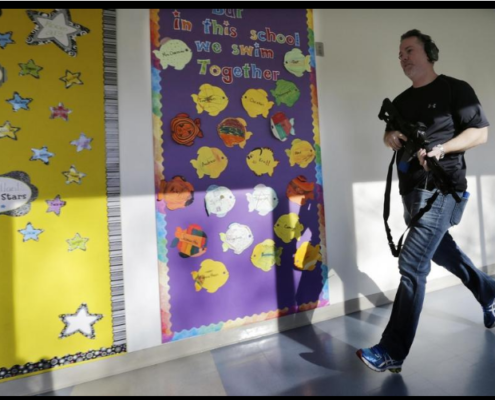 METHUEN — With students off for the Veterans Day holiday, a simulated school shooting at Methuen grammar school Tuesday showed what “active shooter” technology could do to help police catch a gunman if the horrible threat ever strikes as it has at other schools across the country.

In the live demonstration, the “gunman” entered the school armed with an assault rifle, opening fire with dummy rounds first in the school library then rampaging through hallways and classrooms.

But he had only a few minutes to wreak havoc.

Smoke alarm-sized sensors installed in classrooms, hallways and other points throughout the building were activated by the sounds of gunfire, and police officers immediately were able to track his movements and quickly subdue him.

Nearly 100 people, including U.S. Rep. Nikki Tsongas and regional law enforcement officers, gathered in the school to view the demonstration of what the school district bills as the first such system operating in a public school in the U.S.

School Superintendent Judith Scannell said she hopes the district of about 7,300 students can find the money to pay for outfitting its four other schools.

We may request cookies to be set on your device. We use cookies to let us know when you visit our websites, how you interact with us, to enrich your user experience, and to customize your relationship with our website.

Click on the different category headings to find out more. You can also change some of your preferences. Note that blocking some types of cookies may impact your experience on our websites and the services we are able to offer.

These cookies are strictly necessary to provide you with services available through our website and to use some of its features.

Because these cookies are strictly necessary to deliver the website, refuseing them will have impact how our site functions. You always can block or delete cookies by changing your browser settings and force blocking all cookies on this website. But this will always prompt you to accept/refuse cookies when revisiting our site.

We fully respect if you want to refuse cookies but to avoid asking you again and again kindly allow us to store a cookie for that. You are free to opt out any time or opt in for other cookies to get a better experience. If you refuse cookies we will remove all set cookies in our domain.

We provide you with a list of stored cookies on your computer in our domain so you can check what we stored. Due to security reasons we are not able to show or modify cookies from other domains. You can check these in your browser security settings.

We also use different external services like Google Webfonts, Google Maps, and external Video providers. Since these providers may collect personal data like your IP address we allow you to block them here. Please be aware that this might heavily reduce the functionality and appearance of our site. Changes will take effect once you reload the page.